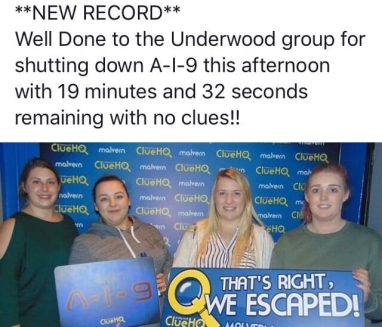 “Six months after the great inventor Professor Tepet’s death – M.I.6. gained access to the lab where he kept all of his greatest inventions. Among the files, they found an abandoned document called A-I-9 detailing an artificial intelligence peacekeeping program. Scientists finally managed to recreate the program, rolling it out across the nation. A type of robot (called ‘9bots’) were integrated into society. The NHS could diagnose patients before symptoms appeared while the army neutralised threats before they happened, the country thrived, for a time. 24 hours ago an anomaly appeared in the code shutting down internet and telecommunications worldwide and soon after chaos ensued. A-I-9 is corrupting the system from the inside. This was meant to be impossible. The only way to stop it is to destroy it before it can destroy us – can you get past their self-protection systems?”

“The end of the world was always going to be man-made. The only question was how?” – Professor Errol Tepet”

Our host for this game was Melissa, we were greeted in the reception area and she took us through to our game where she showed us a short video and gave us our brief.

This room has been set out in a surveillance room type way. There are a few TV screens, a few props, with various puzzles set out around the room. The space is quite small, as a four there was enough space but the maximum sized team of six will find it a little bit of a squeeze. This room was well lit throughout the game, however there are also some smoke effects but this is listed on the website.

This is a non linear game with a variation of puzzles such as problem solving, mathematical, logical and observational. The majority of the game used padlocks. Although space is compact, this is a good game for larger teams as you are able to divide up and complete puzzles. Each puzzle fit the theme of the game well.

Clues were given via a tv screen.

AI-9 is the first escape game our other team members have played and they both loved it and now understand why we love them too. This room is good for larger groups as you can split to complete puzzles in good time however the space is restricting. Less experienced players may enjoy this game more, as more advanced players may find the room a little less demanding than other rooms. The decoration of the room has been well thought out and complimented the theme. We really look forward to visiting Malvern again in the future. We also completed this room with no clues and in record time !!!